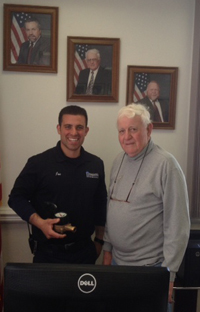 Joe defeated all challengers to win the “Meter Madness” contest that pits competitors against the clock to assemble a water meter from a bucket of parts. Competitors practice year round to compete at the Annual Conference and Exposition of the American Water Works Association (AWWA) in Rochester. And there’s no faster assembler in the state than Joe, who has been with the GWD since 2009.

Congratulations from all of us on winning and on a job well done!