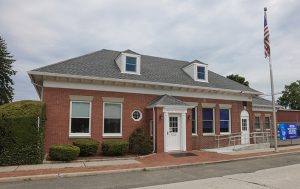 The Greenlawn Water District pumps water from Long Island’s Magothy aquifer with our deepest well reaching down over 700 feet. Our water is treated to be compliant with all local, state and federal regulations and is channeled into a distribution network that totals over 200 miles of water mains. Connected to the distribution system are three elevated storage tanks and a 3,000,000-gallon ground storage tank. Total GWD storage exceeds 6,000,000 gallons.

Established in 1927 when Calvin Coolidge was President, Lindberg flew solo across the Atlantic, and Babe Ruth slugged 60 homers, the first recorded minutes of the Board of Commissioners are dated August 8, 1927. The District’s initial officers were Elwood Powell, G. Fred Ellis, and Edward Smith, and the first well was drilled in 1928. For several years this well and the 360,000-gallon standpipe on Alvord Court were the District’s sole facilities.

A lot has changed since then. 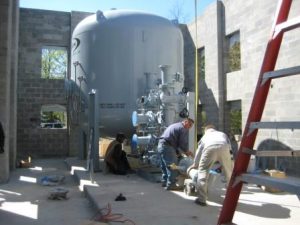 As the District’s population multiplied and the rural area changed to what would become known as suburbia, infrastructure was progressively added to accommodate the demand for Earth’s greatest resource. The original standpipe was dismantled and replaced by a 1,500,000-gallon capacity standpipe. During the 1950s two large storage tanks were built with a combined capacity of 1,500,000 gallons. A 3,000,000-gallon ground storage tank was added in 1970 for even greater fire protection. The District headquarters facility on Railroad Street was enlarged in 1957, and a shop and garage were added in 1975. A telemetering system was installed to facilitate automatic operation of the pumping stations and storage tanks. Another storage facility, dubbed ‘the big red barn’, was added in 2006. Headquarters was subsequently expanded and modernized in 2018.

Today, the Greenlawn Water District has a daily pumping capacity of over 21,000,000 gallons from 14 wells. This is distributed through a network of 200 miles of water mains and includes some 1,300 fire hydrants.

Providing water for fire protection is a key concern. Cooperation with multiple fire districts to regularly test and maintain fire hydrants became a large aspect of the District’s service to the community The number of Fire Districts grew from the Greenlawn Fire Department to include portions of Centerport, Commack, East Northport, Huntington Manor and Dix Hills.